When the bomb went off at the Boston Marathon finish line on April 15, 2013, Roseann Sdoia Materia knew her life was about to change forever. 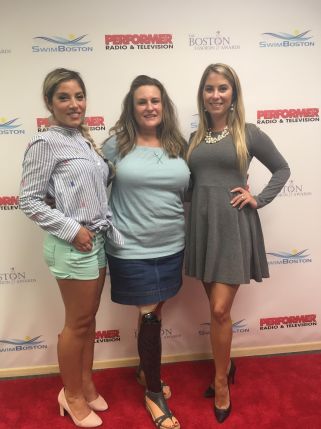 One of her favorite things to do year after year had been to attend the Boston Marathon as a spectator; something her father introduced her to as a young girl and a tradition that she took pride in. Growing up right here in Massachusetts in a town called Dracut, she enjoyed a fun-loving childhood filled with those family traditions that included going to the annual Boston Marathon Red Sox games with her sister, and truly made the most out of growing up in the Boston area.

Roseann had always assumed that fateful day in April of 2013 would be just like the many years before. Yet when tragedy struck the year of the Boston Marathon bombings, Roseann found herself fighting for her own life. When she awoke from a coma, she learned she had lost her leg in the attack and would live with a prosthetic for the rest of her life. Little did she know, however, she had gained both a guardian angel and a soulmate in the first responder that saved her life. “He just kept showing up, sometimes with other firefighters, sometimes by himself, to check on me and make sure I’d made it through the night,” Materia now smiles, laughing back to how her mother had nudged her towards the “cute man” who kept showing up to her bedside.

Mike Materia, the firefighter that had taken her to safety during the attack, had been

determined to see Roseann through to recovery, leaving her to joke that there is “no one else” she’d rather shop for a prosthetic leg with. “He sometimes would leave little candies, little M&M’s or something in the leg as a joke and I’d know…oh, that’s Mike!” The couple’s story soon bloomed from the tragedy into a love story, and today Roseann said she couldn’t be happier to call the man that saved her life her husband.

Although for Roseann the day of the Boston Marathon tragedy still remains one of her darkest days, her positive attitude has helped her learn to see the light. After meeting her husband, learning to walk again with having one leg, and facing emotional trauma from the horror of the attack, Roseann has instead chosen to take a proactive approach to life. “I could have chosen to give up and sit on my couch, but I am a fighter,” she explains, stating this is something she gets from her mother. The courageous woman constantly immerses herself in motivational speaking, helping others cope with tragedy and lends a hand when people need advice about prosthetics. She even documented her experience  in a book called “Perfect Strangers”, which goes into detail of how complete strangers came together to build a new community following the tragedy.